Introducing Deborah Simpier: Althea CEO and Sommelier Co-Founder Who Brought the Gravity Bridge to Life in The Cosmos

Sommelier cofounder, Deborah Simpier, will soon have the distinction of being a cofounder in two major Cosmos-SDK blockchains. Deborah is also the CEO and cofounder of Althea, a global platform for bandwidth sales, which closed out 2020 responsible for over 70% of the microtransactions on the xDAI network. She has played a critical role in guiding Sommelier’s Cosmos Gravity bridge toward completion and advancing a creative vision for its uses. 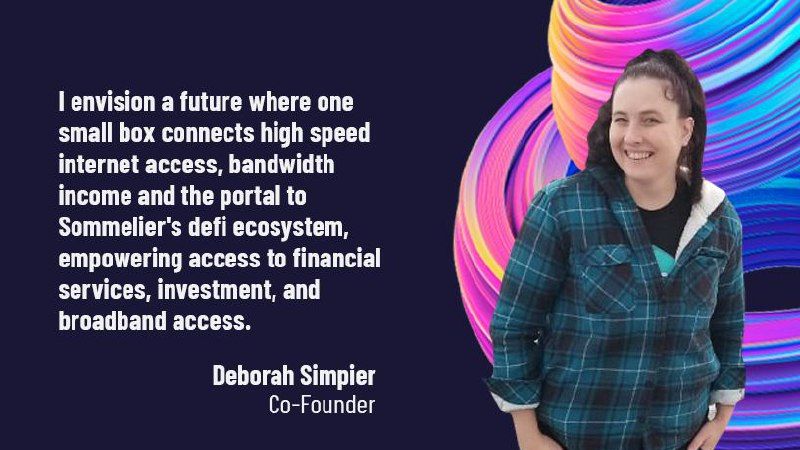 “It was about 2010, I was fighting the good fight for net neutrality and freedom of the internet and working on that from a legislative perspective. Then, I got very interested in how decentralized systems could make this all possible for us to hold the ownership of choice in a programmatic way instead of by pushing the legislators.”

At the time, Deborah and her husband also had started mining some Bitcoin. “We warmed the baby’s room with the miners,” she laughs, “and we got into some Litecoin in those days, trading on Mount Gox, pre-debacle, and rode the train from there to where we are now.”

Deborah worked on decentralized systems from a hardware perspective in 2018 when she met Jehan Tremback and Justin Kilpatrick, the other two co-founders of Althea, who were working on the Althea software.

“I knew right away that Althea was the answer to coordinating a distributed system for decentralized ISP infrastructure,” she says. “I fell in love at that moment with Althea, this concept and the software that Justin and Jehan were building, and came onboard and started working on that and deploying it here in my own home town where centralized system ISPs were failing. Now we have 40% of the market share here.”

Deborah helped to execute the vision for more equitable bandwidth distribution with a straight-ahead approach to getting it done.

Althea takes the open interoperable market from the data center all the way down to the user device. It is medium-of-transport agnostic. The company makes user-owned fiber, multi-stakeholder systems with fixed wireless, Ethernet, Fiber and LTE, which all lend themselves to multi-hop payments. Deborah explains how it works:

“Althea’s innovative pay-per-forward system allows each person, regardless of how they’re delivering that bandwidth, to be automatically compensated. It also works not just in a single hop but throughout a distributed system, so you could have 4, 5, 6, 7, 8 hops -- it’s exactly how the internet is, it’s a series of tubes,” she smiles and adds: “My understanding is that Helium is primarily a proof-of-coverage or proof-of-location type system to prove you are broadcasting in a certain location. These are fundamentally different ways of approaching distributing bandwidth.”

Because Althea is a software platform that lives on consumer routers, it’s very flexible.

“We even make things for MIPS based devices so we can get things into tiny, low cost routers and in a variety of different environments,” says Deborah. “This flexibility contributes to Althea’s positive impacts where it is deployed in South America and Nigeria. The company is currently working on an Althea license in Ghana as well.”

The Althea team realized its original vision in just over three years. A driving force for the company’s success is it's collaborative approach to execution, Deborah says: “Our success happened the way good successes always happen. It’s a lot of work, you show up every day, you keep building, you keep working.”

Achieving High Reliability with a Sovereign Blockchain on Cosmos

Althea has learned to deliver bandwidth with the high degree of reliability required by businesses, as well as EMS buildings, ambulance barns, and fire stations. It’s even how one local Subway gets its internet and pays for it with cryptocurrency. Bandwidth and blockchain share a need for infrastructure that provides high reliability so building on Cosmos was a clear choice.

“For the majority of the 2020 time frame if you look at the microtransaction volume of xDAI we are over 70% of that, so we have quite a bit of volume of small microtransactions moving around the network and reliability and uptime are very important.”

A Bridge to Cost Savings

The Althea and Sommelier collaboration came out of a conversation last year between Deborah and Zaki Manian about how to bring together the talent of the Cosmos ecosystem together in a cooperative way.

“It’s great to talk about the empowerment of decentralized finance and growing the Cosmos ecosystem, and we were ready to get it done, so we made a commitment March or April of last year that we were going to collaborate to bring these ideas to life. I really have appreciated Zaki’s cooperative structure that evolved into Sommelier. Althea has always used DAI so users interact in the Althea system in a stable coin and don ‘t have to worry about speculative value,” she explains, “but if we bridge using the Gravity bridge from DAI to Cosmos we can batch the transactions, which lowers the cost of gas by a significant amount and then allows us to start to open possibilities for DeFi. This was a project that was built by my co-founders, primarily Justin Kilpatrick, who has done an amazing job on it.”

Deborah led the way in imagining the possibilities for regular folks that are part of the system, such as businesses and liquidity providers. “We wanted to give them financial empowerment through the Ethereum ecosystem and the Cosmos ecosystem as well as at a gas price they could afford.”

The result was Gravity, which goes both ways as the bridge from Ethereum-to-Cosmos and Cosmos-to-Ethereum. Deborah brought organization to the process of getting Gravity delivered. She says: “We build the resilient and well-engineered infrastructure that Sommelier needs to be successful.”

Deborah also sees a future in which Althea, with its little box that plugs in with an Ethernet cable, will be the onboarding front end for the decentralized finance world of Sommelier.

“I envision a future where I have a box that gives networking access, I get paid with that box, and then that box connects with Sommelier and then I can actually get returns on my money anywhere in the world. It also makes the world a better place by providing internet access to more people.

There are two core freedoms that we have: financial freedom and freedom of communication. And this is what Althea brings to everyone’s home. So with this small box, anywhere you are in the world, you plug it in and have ownership and empowerment of your finances and of your communications infrastructure.”

Althea continues to iterate tests on the Gravity bridge.

“We have incentivized tests coming up together with the great validator set that we have as part of our community,” says Deborah. “And, we’re going to be looking to launch our MainNet very soon.”

She concludes: “I think the timing is right, the vision is here, and we are just stopping long enough to execute on it. I am very excited to be part of bringing that vision to life. We’ve seen how financial and communication empowerment happen in emerging markets with things like M-Pesa. They go together. It makes sense.”