The Sommelier team has been hard at work for months, and co-founders Zaki Manian and Jack Zampolin got together on Twitter Spaces for an update on some exciting progress on the road to deployment. 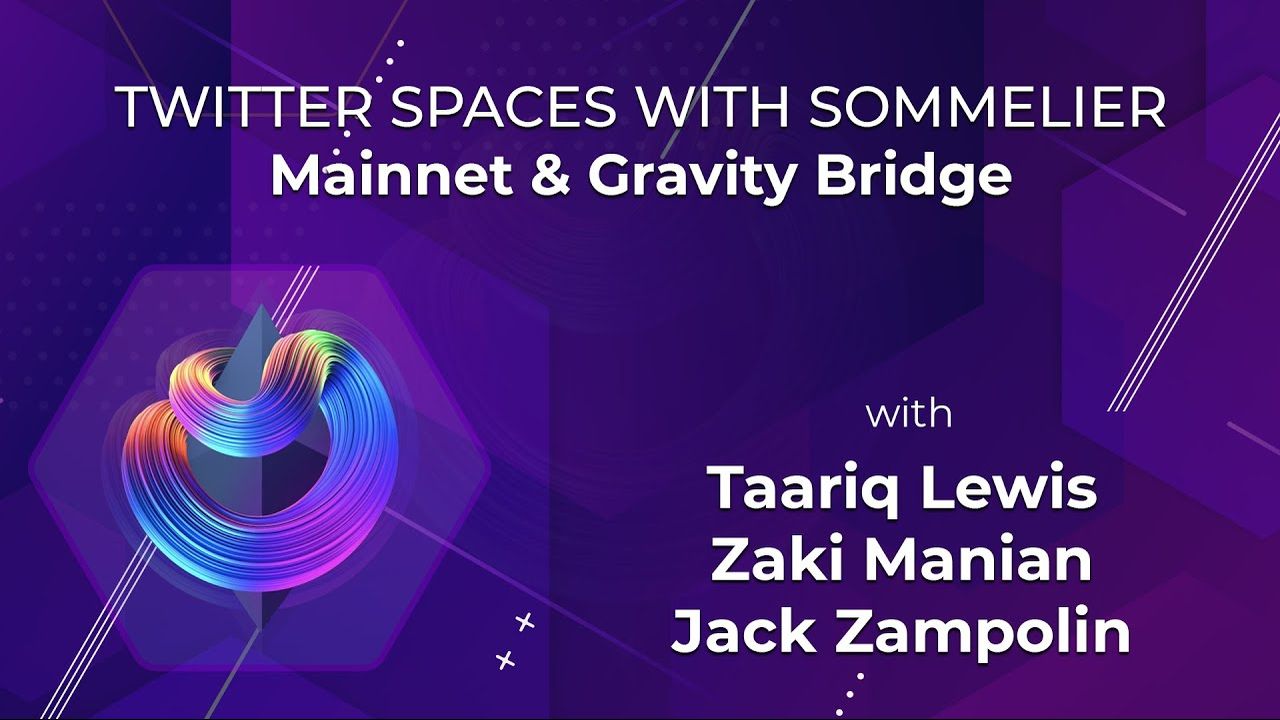 The Road to Deployment: Sommelier’s Mainnet Launch, Gravity Bridge Update, and What’s Next

“We launched a mainnet for Sommelier with a very small validator set up last week and we’ll be talking about what the features are there currently and where the Gravity Bridge software that we've been working on for the last nine months is from a production readiness standpoint as well as what’s coming next for the features for the bridge", says Jack.

“About a week ago, we had one false start that was a minor issue related to production gas settings the week prior. Though we have a number of confirmed validator updates on over Ethereum, we have the Gravity contracts verified on Etherscan and everything’s kind of ticking away quietly in the background awaiting upgrades.”

What exactly has Sommelier deployed?

Currently, what Sommelier has deployed is a basic Cosmos SDK chain with the Gravity Bridge added to it. Jack explains: “This is the Gravity Bridge that we’ve been working on for the last nine or so months. The UME protocol is running on a test net with around 200 validators so there are folks out there testing it on a larger scale than the six validator set that we have gone to mainnet with.”

“Jack and I have done so many of these, yet it always surprises me that there are always hiccups, always problems, and you don’t find them until you run in production. The most hilarious bug that we found is that every transaction on the Cosmos side was using 500 million gas. So, like a typical Cosmos block only has about 20 million gas allocated to it so then no transactions were getting into the block. And, that was a fun thing to figure out and debug. Hats off to Standard Crypto and Gabi who finally got an error log that was like this is what’s going on. So you always find these tricky little bits, auditing the Genesis file, getting these initial delegations always have their tricky bits to it.

“Sommelier is running the Gravity Bridge in production today, the Injector protocol is running the Gravity Bridge in production, and UME is testing with 200 validators on testnet, so more and more people are bringing the Gravity Bridge vision to life, and we are excited to finally have this mainnet running to start having all the stakeholders on the network participate in governance, to have a viable mechanism for increasing the number of stakeholders in the network. All of these things set us on the path to fulfilling the Sommelier vision and starting to control interactive managed smart contracts on the Ethereum chain.

What features are coming next?

For now, most of what’s coming next for the features on Sommelier are governance proposals, Zaki explains:

“We’re going to start leveraging Cosmos Hub governance to start sketching up the future of this network. We have had Cellars in deep R&D for a number of different DeFi protocols that will be coming to a governance proposal soon, and we will be announcing and promoting that. The set of stakeholders and set of people that can vote on proposals right now is pretty limited but we expect that to change over time. I’ve just been furiously debugging our integration tests against running the first Cellars into production.”

Now that Sommelier’s team has launched the Gravity Bridge and knows that it works —there’s a validator set running it— Jack explains:

“We know that we’re going to be able to build on top of that. In our testing environment and development environment we’ve been working a lot to have a Cosmos SDK module that manages liquidity in a Uniswap v3 pool and gives users active management of that liquidity. So, this system has everything from validators bringing in data from our data science team into consensus to allow the validators to make a decision on when to rebalance that liquidity and then the ability for those validators also to send the cross-chain calls over to Ethereum and have them accepted. Right now, as Zaki’s mentioning, we’re in the final stages of testing that project and I think we’re failing on a gas estimation error on submitting the contract call over to Ethereum, which is the absolute last step. So, I’m confident that we’ll get that resolved here soon and, after the initial state of governance proposals what we’re going to do is we’re going to bring this live and we will have live, active management of Uniswap v3 Cellars over on Ethereum from the Sommelier chain as our initial product. So we’re very, very excited about that.”

Zaki observes: “The workflow that you’ve sketched out is the workflow that we’re planning to put into production. The main hurdles are just sort of getting our test frameworks working and reliable. I agree with you that it’s not going to be that big a deal to get these pieces to work.” He explains:

“The focus of Sommelier is really not to build a general-purpose bridge. There is an effort underway in Cosmos to use the same technology for that purpose and we are continuing to contribute to generally improving the Gravity Bridge technology. One of the things I’m excited about is getting leader election, better mechanisms to reduce duplicate relays of validator set updates over the bridge, and get those to no longer be much of an issue.

“I have a list of five technical things that are blocked on me. I finished one of them last night. I think it’s probably close to the end of the list. So, using some information from Tendermint as a kind of voluntary leader protection mechanism is potentially a way of ensuring that we don’t have the current sort of thundering herd situation with our relayers.”

What’s next for Sommelier?

Now that Sommelier is on the verge of launching its first managed Ethereum Cellar via a Cosmos SKD chain, the Sommelier team has been thinking a lot about the next product they want to build and how it wants to use this decentralized management functionality on smart contracting platforms for other things. Jack explains:

“I think that there are a number of different things that are being worked on but the primary one is reinvest. Now, if you’re familiar with the DeFi ecosystem, this word ‘reinvest’ will sound really familiar. Back in DeFi Summer 2020, a lot of products that Yearn was putting out and a lot of these other vault-type products, things like Pickle, which got hacked, etc etc, they basically had this autonomous function except for the reinvest call. And that reinvest call would say, ‘hey take all of the gains from whatever strategy is specified by this contract and reinvest them into that strategy as a way to try to continue to compound those gains.’

“Putting similar Cellars under management of the Sommelier validator set seems like an obvious next move. Not only is reinvest less complex than the rebalance functionality that we’ve had to build to manage Uniswap v3 pools, there’s a lot more contracts that we can build with it, and a lot more things that we can try as far as product development on top of SOMM. And, these would be things like Cellars that wrap different Aave products and provide self-compounding loans and things like that.

“But, that’s a huge new product category that we’re going to be developing. We’ve got some initial code for doing this that we’re starting to work on. Now that we have this first test case basically working— and Zaki’s finishing the last little bit of it— adding additional test cases with additional modules becomes much, much easier, and we’re going to be able to scale this effort up very quickly so that with this initial set of Cellars we’re launching on Uniswap then we’ll have five times that amount with the reinvest functions. And then, with additional code that we’ll be shipping later, we’ll cover more and more use cases. All of those revenues from managing those DeFi products will accrue directly to SOMM holders. And that’s where we’re looking to drive value to this token and how we’re looking to provide tokenomics for SOMM because one of the things that we didn’t talk about with mainnet launch is we’ve launched with zero inflation so we do have a fixed supply of the token.”

“I thinks people should expect as we knock through these significant organizational and operational hurdles, like getting a mainnet up and knocking out these tests, there’s going to be an ongoing steady stream of new things to talk about. Mainnet is a big milestone for us. It took about six months longer than I was originally anticipating but we got here and it sets up the stage for what comes next.”

Speaking of What’s Next, Sommelier’s Hiring!

Jack’s very excited about what his team has coming down the pike and says:

“It’s going to be an active next three to six months of product development at Sommelier, and we’re hiring. If you are interested in working with Sommelier on some of the most exciting cross-chain technology and think you have something to offer, please hit us up, we would love to chat with you.