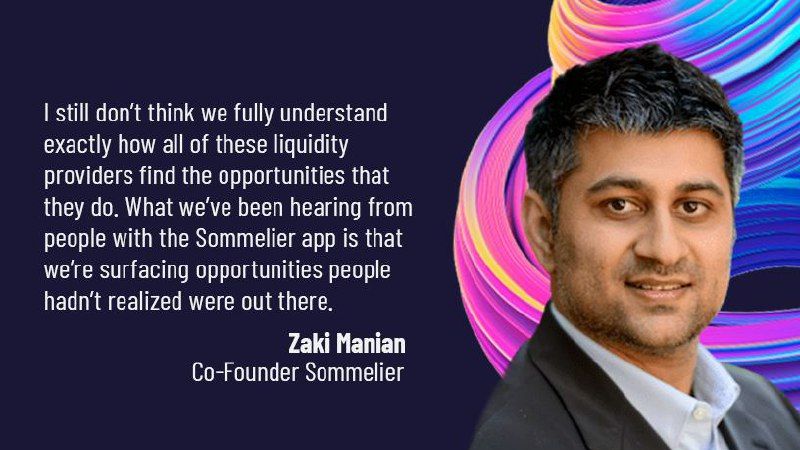 Being a liquidity provider is stepping into a market-neutral role that has existed as long as there have been financial markets. The purpose is to try to ensure that there is always someone willing to take the other side of every trade. A liquidity provider is said to “make a market” by always being prepared to buy or sell a particular asset at certain prices. Zaki Manian explains:

“Mostly, when we refer to a liquidity provider here we’re talking about a function in a market that has come about with the creation of automated market makers -- the Uniswaps, the PancakeSwaps, the Curves -- where you add liquidity to a smart contract and then traders are able to use that liquidity for their trades. Basically the function of a liquidity provider is to enable traders to get good prices and low slippage on their trades. That’s how they earn their fees.

The role evolved naturally because when you want to sell whatever asset that you prefer there may not be someone at that instant who’s willing to buy it because they need it or simply want to take a position. Market makers bridge the time preferences of different parties in a market. It’s an essential function.”

Twenty or thirty years ago an aspiring liquidity provider needed a lot of capital and specialized access to markets, such as registration, licenses, and even just being around the “right people” to do this. Today, it’s open to everyone.

Zaki observes: “What’s been exciting about the development in the constant function market maker space is that becoming a liquidity provider has become an opportunity that’s open to everyone. The other side of it though is that we're clearly in a phase change of what it is to be a liquidity provider right now.”

How the liquidity provider role has changed

In the old version, being a liquidity provider was a pretty simple, passive activity. Zaki says:

“You took your capital, you put it in a constant function market maker, and that was the activity. You just had to pick what pools you were going to be in, when to get in, and when to leave. You didn’t have to do a lot of complex engineering to do that. And even in spite of that there weren’t that many tools available for liquidity providers. Though things are evolving with Sommelier's existing application to make it a little easier to understand what tools are out there and what you want to get involved in. Zaki observes: “I don’t think there’s ever been a total view of where liquidity providers are and how they get there.”

He describes the following key pieces of the puzzle:

“We know that there are billions of dollars providing liquidity across all of the AMMs and we know that there is a diversity of participants in this marketplace, everything from professional trading firms that see opportunities here and participate in these markets to yield aggregators like the Yearn’s of the world, which aggregate a bunch of funds from people and put them into things like stablecoin pools. There are also retail liquidity providers and the farming of new tokens as they appear short of this long tail.”

Having looked at this area for six months, Zaki says: “I still don’t think we fully understand exactly how all of these liquidity providers find the opportunities that they do. What we’ve been hearing from people with the Sommelier app is that we’re surfacing opportunities people hadn’t realized were out there.”

He notes: “The workflow has not been easy. The team at VolumeFi has been building tools to make it easier to add liquidity, remove liquidity, accelerate the workflow, and more. As you can see when you go to the Uniswap page there’s a very easy-to-use interface for doing a swap, but there isn’t an easy interface for adding liquidity to a pool. Yet here we are with billions and billions of dollars of liquidity in these pools.”

Being a liquidity provider in the current environment is an amazing opportunity -- you can earn fees, you can play a role that in traditional markets is a very permissioned, elite activity that not everybody gets to participate in. But the experience needs to be improved. Zaki explains:

“The outcomes, the risks, whether or not being a liquidity provider is profitable for you has historically been a difficult thing to analyze and reason about and even more difficult to control.”

A key area that needs to be addressed is capital inefficiency.

"It’s amazing how much people use this given that they could potentially get better prices on centralized exchanges. Certainly, the convenience factor of being on chain is a huge factor. There are integrations with other smart contracts, all these things, have been why, in spite of the limitations, constant function market makers have been so successful.”

Uniswap v3, as with other innovations coming around in the constant function market maker space, is about using capital much more efficiently to give traders better prices. In the current phase, being a liquidity provider now has many new things that people have to think about and be aware of as we move to these more capital-efficient constructions.

Some industry watchers have expressed concern about the emergence of the reduced role of passive liquidity providers. Zaki sees it this way: “I think one of the most important things I take away from that is that the win of better prices for traders probably swamps everything. Ultimately the user of the automated market maker is the trader who's trying to get a good price, a smart contract that’s trying to liquidate an asset or repay a flash loan. It is a two-sided marketplace but the liquidity provider is in the role of the producer, producing the product and the trader is consuming the product.”

Now, the virtuous cycle is that traders get good prices and there are more fees to be had, which attracts liquidity providers.

Finding where traders want to do business

In this new phase that Uniswap v3 enables, liquidity providers are going to have to start having more of an opinion about the prices at which they want to offer liquidity, instead of the unlimited range that the protocol allows. Zaki explains why:

“The thing that Uniswap v3 does that’s very clever and impressive from a technical point of view is that it allocates fees based on where the trades actually occurred and how your liquidity was distributed. So if you offer your liquidity over a wide range and someone else is offering it in the near, you’re both going to get fees from that trade. But the person who hit the spot price dead on and is providing concentrated liquidity right around the spot price is going to get a proportionate amount of fees, while the person providing liquidity over a wide range of prices is going to miss out.”

Protection for the liquidity provider who didn’t want to think too hard about a target price comes down to the kinds of tooling that get built around this.

“This phase change was probably inevitable,” says Zaki. “The fee thing was hard. If you think about the core value in the 18 months that it took for Uniswap v3 to be invented, it was to get the fees right. I imagine that there is going to be a shift over the next 18 months and this kind of stuff is going to show up everywhere.”

Sommelier and the new balancing act

A critical part of this equation is the need to balance the gas costs required to update the range over which they’re trading. For liquidity providers, Sommelier will automatically provide information to concentrate their liquidity well and give them tools to make the gas problem manageable.

Zaki adds: “Eventually, Sommelier will give liquidity providers opportunities to have validators do much of this work on their behalf so they don’t have to sit there all day long on a ledger trying to figure out whether or not to move their liquidity positions.”

“There’s already a bunch of savings if you’re in a pod or a pool where the actors are able to aggregate all that liquidity and move it as one. Leveraging an incentive mechanism to optimize placement helps net more fees as well,” says Zaki.

Sommelier is a design for building a really robust liquidity aggregator for the concentrated liquidity world.

“The analysis that we’ve been doing is that the cost amortization works out,” Zaki says. “Unless you are individually at scale, the benefits of aggregation under many circumstances are going to outweigh any advantage of doing it yourself. Doing it yourself in layer one is going to be really tough and we’ll see optimization in other environments -- if it’s even feasible there.”

Sommelier’s goal is to go after the longtail of prices. There are likely going to be solutions, for instance in the stable coins space, that are going to be simpler. But as you get to the long tail you want to have a really resilient system able to automate the process. The aggregation piece is critical.

Zaki says: “You don’t want to just reintroduce custody in another name. You don’t want to say a DAO is running this but really it’s just a hedge fund under a different name or a back door. If we want to keep this system democratized, accessible, and fulfill the dream here, we do need the robustness that a BFP brings so as not to reintroduce a centralized custodian into the mix.”

Doing the pricing decision process in a decentralized setting is an expensive piece of the puzzle, particularly if you’re going to do the decision process on layer one directly. There is going to need to be a continuous evolution of analysis of every one of the price pairs.

Looking ahead, Zaki concludes: “The network must be incentivized to start optimizing different strategies, and we’ll want this to emerge organically in this decentralized setting. The right way to model a price as an asset evolves is probably going to change as well.”

You can reach out to Zaki and other Sommeliers on our Discord 👉 https://discord.gg/Y4p6eB5Eyr