Liquidity Provider Insights with Zaki Manian - Ep. 5 - A Bright Light at the End of a Long, Tough Weekend for Bitcoin

Ready to deconstruct what happened last weekend? Sommelier cofounder, Zaki Manion, discusses what you as a liquidity provider (LP) will find helpful as you make your way through a treacherous and bloody time in DeFi. Zaki provides some much-needed perspective in our latest Liquidity Provider Insights with Zaki Manian Episode. 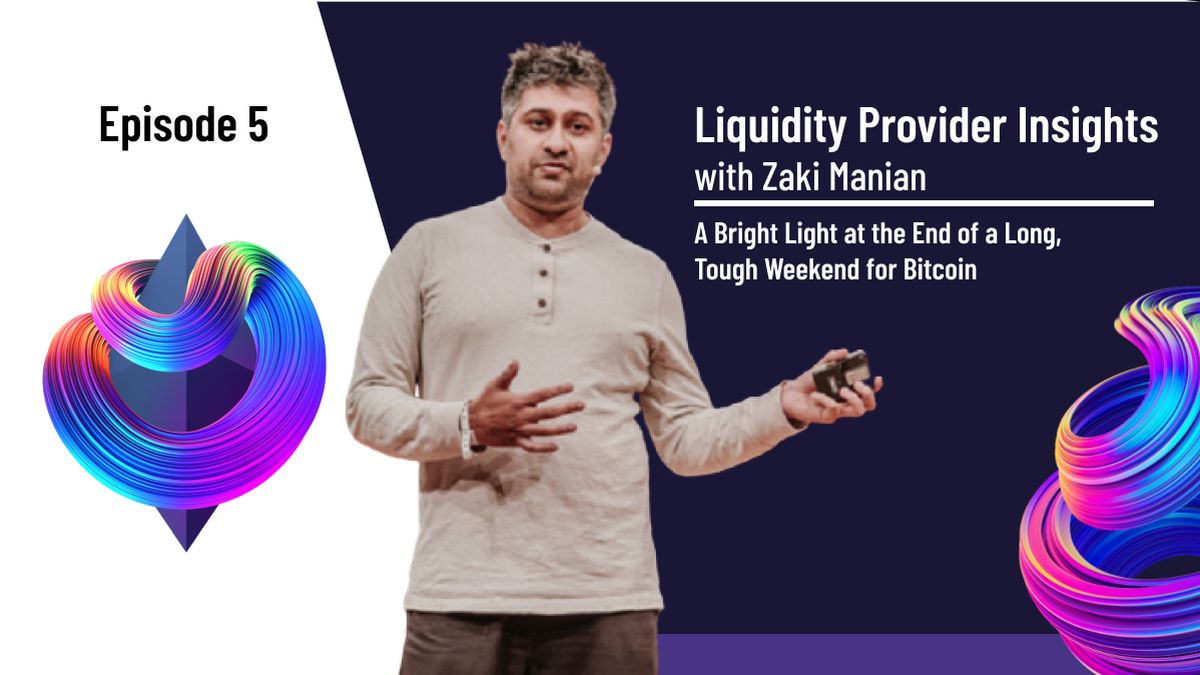 “It was absolutely a rough week,” says Zaki. “But, times of high volatility are good times for liquidity providers. There are lots of opportunities to deploy liquidity and make money, especially when everything rebounds as it has before. You’re just looking at Uniswap v3 volumes continuing to skyrocket, crossing $2 billion on Sunday. And, we continue to see increasing amounts of volume on Uniswap v3. Personally, I’m excited about Sommelier’s enormous progress this week on the Uniswap v3 staking contract.”

“The other thing that’s really nice to see is how the neutral and bullish recommendations Sommelier demonstrated back when we launched the Pairings app on Uniswap v3 are playing out. This is all about time and position. Looking back, we can see the strength of going with statistical analysis and letting the numbers do the talking. It’s a volatile market. The technology of interacting with Uniswap v3 is improving and we’re continuing to work on it. These early recommendations have been a good opportunity for people to come in and provide liquidity.”

Pairings recommendations have enabled LPs to continue to make money. Typically, retail LPs on Uniswap v3 don’t have a big data science team breaking down statistics for them so they’re going to guess. That could never predict the types of wild gyrations we’ve been seeing. It’s better to have a tool that can help LPs take a position that makes it really easy so that at least the boundaries, where your liquidity is provided, will survive. Zaki anticipates that LPs increasingly will be turning to these types of automated statistical solutions. He says:

“I think that there’s an inevitable migration towards ecosystem tools around being a LP in Uniswap and as the volume continues to move to Uniswap v3 the opportunity is in concentrated liquidity and it’s all about just getting the tools to make that trackable.”

We’ve been hearing about automated rebalancing vaults being launched this week so we thought we’d take a moment to explain how these automated vaults differ from Pairings.

Zaki says: “I expect this space to evolve rapidly. These vault products are the idea of fire and forget. Put your money into this vault; there’s a system that controls it. We’re building our own version of this. Our work on Cellar protocol is all about the Sommelier version of an automated vault. This is still a static position. We’re starting to see people experiment with being their own vault where they have lots of positions open as ranges and they’re moving liquidity back and forth during the day and the power users are emerging. The vaults are starting to emerge where people experiment with different operating strategies.”

“This version of Sommelier was basically designed to work well for a passive LP who wants to make money and doesn’t want to interact with it too much. It was very much an experiment to see how this would work out. And, I do think it’s working out, but the arms race continues. And, we expect that there’s going to be a place for Pairings’ type recommendations and there’s going to be a place for active management and both of these things will continue to evolve.”

Are you bearish or bullish?

“I think what we saw over the weekend is almost an unprecedented situation, where we had a bitcoins-spot-price-led decline in the market. There seems to be a net asset flow from Asia, specifically out of China, and into Western buyers. We’re hearing all of these stories about a real crackdown on fossil fueled mining operations. From what I know about the mining business, a lot of these miners are debt-run businesses and the expected payoff period of these capital assets that they have purchased through debt simply has been shortened enormously. You have to rearrange your entire business around an entirely new cashflow profile that came out of a government announcement. But, this is also going to probably be in the long run good for Bitcoin in the sense that it’s going to push a lot of more hash [computing/processing] power toward renewable, cleaner power outside of China.”

What’s behind the change?

There has been a confluence of events that have pushed the carbon intensity of mining and how mining interacts with renewable energy from being a fringe topic discussed by a bunch of nerds to the top of the consciousness. Zaki explains:

“One interpretation of what’s happening in China is less that suddenly the central government became super concerned about making a change, and it’s more just the idea, the public perception of the mining industry was raised in the consciousness to the point where people in the Chinese government wanted to act right.”

“But, there’s also very little sign that there is a bigger crackdown in cryptocurrency either way in China. It seems very targeted to the mining industry and a desire of what mining continues in China. You would ask the question, oh well you can’t use coal-based power to power your bitcoin mining anymore, why not move it to where hydroelectric power is located? China famously has enormous dams that generate large amounts of hydroelectric power. I think the reality is that all that hydroelectric power has been used for mining. It has been for a long time. And, so there really isn’t any surplus power there so it really means that that hash power has to move abroad.”

And, this adds up to good news for Bitcoin. So, to sum up:

Looking ahead, come to Sommelier and we’re going to share the good times and help guide LPs through the wild rides.

Join us next week for some new ideas percolating for pool operators. And, Elon Musk, if you’re reading this -- please consider tweeting that you love Sommelier! It could help?