Uniswap is the interface that enables traders to swap ETH or ERC-20 tokens on-chain by pooling liquidity. With the Uniswap v3 launch last week, Sommelier cofounder, Zaki (pronounced “Zucki”) Manian, breaks down what liquidity providers can expect and need to know. 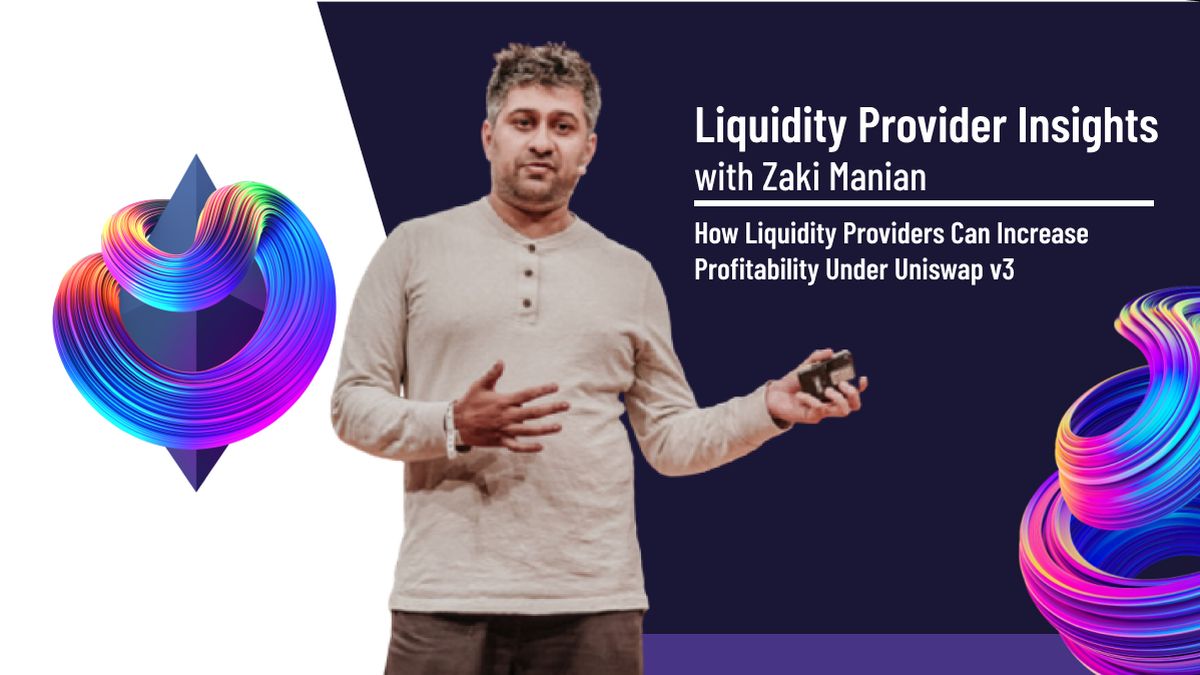 Zaki previews some changes from Uniswap v2 that enable Uniswap v3 to provide opportunities to have safer returns in that world. He says “they are the kind of set-it-and-forget-it returns that you see right now on Curve will come to the Uniswap world.”

He explains: “One change is that pools that you find on Curve that you don’t find on Uniswap will come to Uniswap v3 -- stable client pairs, ren BTC -- things where you have different security models but the underlying asset is different.

“The same with stable clients, where you have underlying different stabilization mechanisms with redeemability but the target price is the same. These pools will come to Uniswap v3 because of the ability of liquidity providers to concentrate their liquidity around things being sent at the same price.”

Here’s Zaki’s roundup of the Sommelier app’s function and attraction for liquidity providers:

“Sometimes, I’ve noticed that Sommelier.finance.app leads where the conversation is going to be on social media in the next coming week. And, in those kinds of new, emerging assets, Uniswap v3 is a much more competitive place. It is much more like playing a sport rather than just putting your money down and hoping that you make money from the APY that is generated as people start trading the assets.”

As liquidity providers enter these long-tail assets in Uniswap v3, Zaki observes: “The biggest thing they’re going to have to figure out is how they’re going to concentrate liquidity. And that’s the goal for Sommelier with the Uniswap v3 launch as we start creating tools. First, so that there’s data driving what decisions that our liquidity providers using the platform are making, and then with the protocol the actual ability to have the validator set.”

The journey that people are going to be on with Uniswap v3 is as they start forming opinions about how they distribute liquidity as prices change on different assets.

Zaki says: “A good place to start is to begin providing liquidity in pools, but where you could go with that is by being a validator for the Sommelier protocol. Validators drive a set of pools and help make allocation decisions within the protocols as we all try to create democratized tools for nonspecialist traders and liquidity providers to be able to effectively compete in the Uniswap v3 world.”

He adds: “The reality is that you have to compete. If you try to just passively put in your liquidity you are going to miss out on those fees and those yields that a trader that better concentrates their position is going to do.”

Zaki sees a movement to the next phase in which validators are going to differentiate their skill sets more than the current focus on their ability to contain high uptime and not lose control of consensus. He says:

“That was the first generation of being a validator. The future generation of being a validator will be much more involved in it and just the baseline is I can keep my nodes online and do the minimum. One of things that is going to happen in the Sommelier protocol with validators is that validators are going to have to drive allocation decisions, drive rebalancing events in various pairs so that users’ liquidity is optimally placed.

“If you want to become a validator on the Sommelier protocol, you’ll want to start learning Uniswap v3 really well because those are the people who are going to get the delegation and want to be validators. They will drive the success of our protocol as people learn to figure out the nuances of gas prices, price change, narrow spreads, narrow liquidity positions, wide liquidity positions -- what is better than the other.” He notes: “We’re essentially trying to build a collaborative workspace for liquidity providers here driven by both the app and the protocol.”

Liquidity providers can depend on validators to time trades on positions in a way that they won’t be able to do themselves. They will have to learn and understand the various advantages of Uniswap v3 and why to change how being a liquidity provider works.

“The biggest thing that the Uniswap v3 design is about is reducing the price impact of trades.” says Zaki. “When we talk about capital efficiency, what we’re really saying is the amount of capital that it takes to reduce the price impact of a trade. I think that what we understand is that as price impact falls, demand for the product of trading, demand to trade the pairs should only go up. And that, I think, is a key piece of this positive feedback cycle. If we can use smaller amounts of capital to make larger reductions in price impact then we all win.”

What else liquidity providers need to know

In the Uniswap v2 world, all a liquidity provider really had to think about in terms of their cost of doing business was how much it costs to enter a pool. In Uniswap v3 they will be exposed to three other costs. Zaki explains:

“One is the cost of moving liquidity from one position to another position just in terms of gas costs. Another thing liquidity providers need to be conscious of is that there’s going to be a cost to swap their tokens as they move the range over when they’re providing liquidity. And then the third thing is miner-extractable value (MEV), there’s going to be extraction every time they rebalance by the miners who are trading against that rebalancing event.”

“The vision of the Sommelier protocol is that we are able to create a collaborative environment so that those costs are collectively mitigated across all of the users, and the validator set is incentivized to figure out how to optimize and mitigate all of those costs while providing liquidity.”

Gas cost optimization is the master of its own domain

Zaki explains: “Gas cost optimization is like a whole domain inside of Uniswap v3. And this sometimes leads to the feedback that Uniswap v3 may be just better on L2s, like Optimism is on L1s. I honestly don’t think that’s the biggest deal.”

As a liquidity provider, Zaki explains what you’ll find in this latest iteration of Uniswap:

“There are gas costs to picking what nonfungible liquidity positions you have for a pair. Every liquidity provider can make their own unique decision about this.

“And, all of this sounds like a huge amount of cognitive overhead and I think that’s right,” Zaki says “and why we think that the protocol that we’re building is going to make a significant impact on the accessibility of providing liquidity in the Uniswap v3 world. The validator set, the governance, the token holders are all working together to mitigate a bunch of these costs and to aggregate our capital brought into these costs over a large user base rather than having every liquidity provider having to bear these costs individually.”

Here’s how the protocol works on the three sources of costs: Gas, swapping tokens, and the MEV that could potentially be extracted on a trade.

Zaki describes the reasoning behind the protocol development in these three key areas taking place:

“The first thing is the gas costs are the same, whether you’re moving one ETH of liquidity or 100 ETHs of liquidity. So, just being able to pool liquidity and have it move together saves you on that first cost. The second cost is really a cost of placement. If you’re moving your liquidity in the most naive way possible, as a token moves up relative to another token, you have a lot of opportunity to be creating a lot of costs from having to swap again and again and again. A slightly more intelligent placing can save a lot on costs there. And, then the third kind of cost is really about having high quality price data as you’re rebalancing so that you’re giving up the least amount of value to the miners as you’re trying to optimize your liquidity.

“We are seeing an increasing adoption of tools like Flashbots, which can be integrated into the Sommelier protocol. These things are difficult for casual users to take advantage of but by banding together we sort of socialize some of the engineering complexity costs of mitigating MEV. The other thing is it’s all about having tight bounds on the swaps that you do and where those swaps are going to be executed, as long as you have very strongly targeted mitigations. And we’re trying to mitigate all of this stuff in our smart contracts so the set of tooling that Sommelier adds value on top of Uniswap is already built in with as much logic as possible to mitigate the opportunity for miners to come in and get cheap tokens from you.

MEV is a consideration that is going into the Sommelier design for interacting with Uniswap v3.

“The reality of the situation is that managing the costs of gas, swaps and MEV is going to be the art and the science of optimizing the Uniswap v3 user experience, with the exception of the Stablecoin use case. The Stablecoin use case should be a pretty simple use case of people being able to put their tokens in and really all they have to care about then is fee reinvestment, when you want the extractor fees, pay the gas and put the fee back in the pool.”

Fee reinvestment in Uniswap v2 was automatic, you didn’t have to do anything, the money just went back in. Fee reinvestment in v3 is not automatic. “This is another reason for pooling because it costs as much gas whether your fees are small or large to put your fees together. I think this is going to drive a lot of adoption of pools for Uniswap v3, and the Sommelier Cellar pools are hoping to be some of the best pools out there.”

Zaki says: “I’m so excited about the Uniswap v3 launch next week. I think we’re going to be talking a lot to the community about how adoption is happening.”